What Should I Do If the Negligent Driver Offers Me Cash at the Scene of My Car Accident? 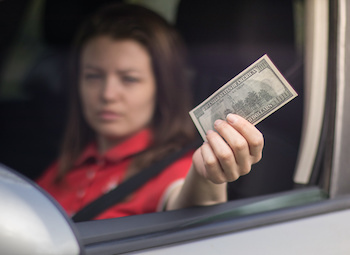 You are entitled to compensation for your medical expenses, lost wages, property damages, and pain and suffering under California law from a negligent driver who caused your car wreck. If they offer you cash at the crash scene, you may be tempted to accept it to avoid the hassles of filing a claim with their insurance company, especially if you think the crash was minor.

However, as our San Diego auto accident attorney advises, you never accept money from the motorist right after a collision. You could forfeit your fundamental rights if you take their payment.

Why Would a Driver Offer Cash at a Collision Scene?

If a negligent motorist offers you money after striking your vehicle, you should be wary of their intentions. A driver could want to settle a claim by providing cash on the spot for many reasons, including:

You should never agree to a payment by a motorist right after your car wreck. Here is why it would be a big mistake to resolve your claim this way.

#1: You Do Not Know How Much Your Car Repairs Will Cost

Even if the damage to your car appears minor, it could cost more than you think to repair it. In addition, there could be other problems with the vehicle that you do not notice until you drive away. You do not want to have to pay for these additional expenses on your own.

#2: You Could Have Suffered Injuries

Right after your crash, you may not realize that you were hurt or experience a few aches and pains that you do not believe are a big deal. However, adrenaline could be masking your injuries, or you could have suffered a severe injury where symptoms do not develop for days or longer after the collision.

You could have suffered long-term, hidden injuries, like a traumatic brain injury, back, and spinal injuries, and internal bleeding. The medical costs could quickly add up, and you may have to take off months or longer from work while you recover.

#3: Your Settlement Could Be Final

If you accept the negligent driver’s cash offer, it may be considered a final settlement of your claim. You may not be able to pursue a claim for additional car repairs or injuries you later discover. You do not want to waive your right to recover all the compensation you deserve by accepting a small cash payment at the accident scene.

If the other motorist tries to get you to accept cash, they will also try to convince you not to contact the police. However, you should always call the police right away.

An officer will investigate the crash scene and write a police report. The police report can contain information that can help you win your case, such as:

Have You Been Injured In A California Car Accident?