Top 8 Errors That Could Hurt Your Auto Collision Claim

Being involved in a car wreck caused by a negligent driver can be a frightening and confusing experience. And if you’ve never filed an insurance company claim before, the last thing you want is to make mistakes that hurt your case and force you to accept less compensation than you deserve. So here are the top eight errors that our San Diego auto accident attorney says you don't want to make.

So when there are obvious injuries, there's no question that you'll get prompt medical attention. But this can't be your only guideline—some injuries may feel minor at first, or symptoms of much more serious conditions might not develop for days or longer after your crash.

So it's always vital to get a medical examination within 48 hours of the crash, even if it doesn't appear you were hurt, so your condition doesn't worsen. Additionally, the insurance carrier can't dispute that your injuries were the result of the crash when presented with a physician's timely documentation, diagnosis, and prognosis of your condition.

2: Not Calling the Police

It's essential for police to be called to the scene of the accident. They'll conduct an investigation and prepare a police report. It provides you with important information such as:

Without this valuable evidence, it's more challenging to prove the other driver’s responsibility for causing the collision. 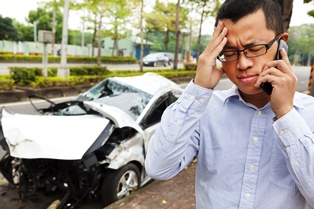 You need to be very careful what you say to the other driver, the police officer, and an insurance adjuster. You may not realize it at the time, but even statements like “I’m sorry” can be misconstrued as an admission of fault.

And if you think you were partially to blame for the crash, don't admit anything. It may not be true, but your statements could be used by the carrier as leverage to reduce your settlement or deny the claim. Let the investigation take its course.

Take photos with your cellphone of damage to vehicles, road conditions, skid marks, debris on the road, your injuries, and anything else that you believe will be helpful evidence. Of course, you might not be in any condition to do this, so try to ask someone to do it for you.

It's also important to get the contact information for any witnesses to your crash. Don't rely on the police to do this for you. You also need to obtain their witness statements before they move or forget the details of how your accident happened. A personal injury lawyer will be able to help with this.

5: Agreeing to Give a Recorded Statement

The negligent driver’s insurance adjuster might ask you to give a recorded statement. As hard as it is to believe, you don't have to agree to this question and answer session to settle your claim. In addition, you could inadvertently say something that damages your case or is misconstrued by the adjuster.

Another big mistake that accident victims make is posting about their accident and injuries on social media sites. Stay off social media sites, like Facebook, Twitter, Instagram, LinkedIn, and others, as well as website discussion boards. If you plan to post on them, be careful not to discuss anything about the accident or your injuries. An adjuster could search these sites multiple times before settling a claim, searching for posts where you admit fault or that show you doing activities inconsistent with your injuries.

You don't want to accept the insurance carrier's first offer of settlement. It may be for far less than you're entitled to under California law. Never settle your claim or sign any legal documents without first consulting with an attorney.

8: Not Retaining a Personal Injury Lawyer

One of the biggest mistakes people make is not hiring an experienced San Diego car accident attorney immediately after their crash. A skilled personal injury lawyer has strategies to handle these and other common errors people make in these cases. They'll also work on your behalf to collect the evidence necessary to prove your case, and hold the driver and their insurer responsible so you receive the proper financial recovery you deserve.