If you were hurt in a motorcycle accident caused by a negligent driver, the laws that apply to your claim for injury compensation are the same as if you were involved in a car accident. However, this doesn't mean your case will be the same.

At the Law Offices of Mark C. Blane, our San Diego motorcycle accident attorney understands the unique challenges motorcyclists face when filing a claim. We are committed to fighting aggressively to hold the at-fault driver accountable, negotiate with insurance carriers, and secure the proper financial settlement our clients deserve.

Six Reasons Why Motorcycle and Car Accidents Are Different 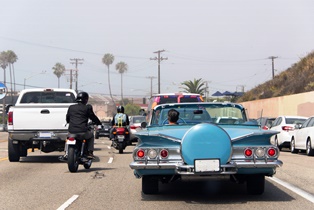 Motorcycles can be fun to ride and are often a less expensive form of transportation.
However, they're also inherently more dangerous than cars or trucks, which adds to the complication of accident cases. Here are some reasons why.

It's not uncommon for a negligent driver who causes a motorcycle accident to say that they just didn't see the motorcycle before hitting it. However, this isn't a valid defense in a motorcycle collision case. Drivers have a duty to watch for others they share the road with—including motorcycles—and operate their vehicles in a safe manner to avoid causing a crash. When they breach this duty, they can be liable for injury compensation.

The only things protecting riders from the force of a motor vehicle or truck striking them is their clothes and helmets. Even though much of the motorcycle gear recommended by the California Department of Motor Vehicles is technologically advanced, it still doesn't offer the same safety features as seat belts and airbags—or surrounding structure.

According to the Insurance Information Institute, motorcyclists were 27 times more likely than occupants of passenger vehicles to be killed in a crash per mile traveled in 2017. Common injuries victims suffer include:

Because the injuries are more catastrophic in a motorcycle accident, the value of a victim’s claim is likely higher than passenger vehicle wrecks. Victims are much more likely to need expensive treatments and be off work for longer—if they can return to their job at all—than a person injured in a car crash. It's crucial that their settlements include any future losses so they can afford all levels of treatment to reach maximum medical improvement and have the financial resources to support their families and themselves if they're unable to work.

Jurors Can Be Prejudiced Against Motorcycle Riders

People—including jurors—can be prejudiced against motorcyclists and perceive them as reckless bikers. While it's true that a few motorcycle riders might race or otherwise engage in unsafe behaviors, most motorcyclists are conscientious travelers who obey traffic laws and try to avoid getting in an accident. Unfortunately, a bias against motorcyclists can make it more difficult for a victim to receive fair financial recovery in a jury trial.

Insurance Companies Can Be Unfair

Insurance adjusters can also be prejudiced against motorcyclists, and this might affect their claim handling. In addition, because the value of a rider's case will most likely be higher, carriers often fighter harder and longer to reduce the amount of compensation issued in a settlement—or deny the claim altogether.

Ensure the Compensation You Deserve

Were you injured in a motorcycle accident in San Diego or Southern California? Retaining a knowledgeable motorcycle accident attorney is essential if you want to win your case and obtain the injury compensation that will help you get back on track with your life. To learn about my record of success in these cases and how I can assist you, start a live chat to schedule a free consultation today.