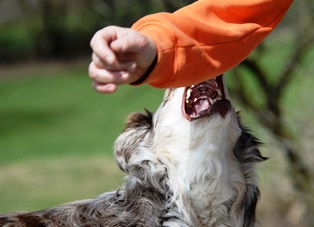 Being bitten by a dog can be a terrifying experience. Such an incident often causes physical and emotional trauma. Some injuries are permanent, such as scarring, disfigurement, nerve damage, and amputation. Dog attacks can be even more tragic when the victim is a child, which is sadly common.

Fortunately, individuals who suffer injuries caused by a dog attack can recover compensation under a variety of California laws.

Under California Civil Code § 3342, a dog owner is strictly liable for injuries caused by his animal biting someone. This is true whether or not the dog bit someone in the past.

In order for this law to apply:

A person can be lawfully on a person’s property if he's a guest or is lawfully conducting business on the property, such as a postal worker, police officer, meter reader, or contractor. In order for this law to apply, the dog must bite the victim, but the bite doesn't need to break an individual’s skin to qualify.

If the animal injures someone by jumping on or scratching him, the owner wouldn't face responsibility under the strict liability law.

There are exceptions when this law isn't applicable. They include:

Liability of the Owner Under Common Law Scienter

There are other ways to hold the dog's owner or keeper liable for compensation after an attack. Using these laws may be necessary when the strict liability law doesn't apply because there wasn't a dog bite, or the claim is against someone other than the owner.

One possible claim in this situation is the common law doctrine of scienter. It holds individuals liable for the harm caused by a dog known to be dangerous or vicious. For this law to apply, there must have been prior dangerous actions by the dog, and the owner or keeper must have known of them.

What constitutes a dangerous or vicious dog is defined by California statutes. A dog is considered dangerous if it's unprovoked on two separate occasions within a 36-hour period and engages in one of the following:

The definition of a vicious dog is if it caused the serious injury or death of the victim when unprovoked, or the dog has been previously identified as a dangerous dog and continues those behaviors.

If a dog injures an individual but doesn't bite him, the victim may be able to file a negligence claim against the owner. This claim can also be raised against a handler, keeper, or person walking a dog that bites or attacks someone. The victim has to prove one of those individuals didn't use reasonable care, and this breach of duty was the cause of his injuries.

For example, if a dog injured a child by knocking him off his bike, it would have to be shown the negligent party didn't properly restrain the dog on its leash.

Were you injured in a dog bite or attack in San Diego or Southern California? You may be entitled to compensation for medical bills, lost wages, and pain and suffering. Call our office today and schedule a free consultation to learn more about attorney Mark Blane’s experience and how he can assist you.